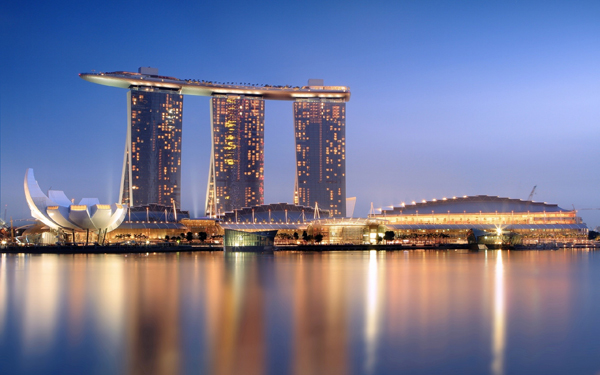 Singapore took leisure and entertainment to a new level with the opening of the Marina Bay Sands in 2011. It is a resort with many options and stands right in front of Singapore’s famous Marina Bay. The property has been developed by the Las Vegas Sands and is the world’s most expensive casino which is billed $8 million.

The 20 hectare resort of the Marina Bay Sands was designed by the Moshe Safdie Architects while the engineering was done by Arup and Parsons Brinkerhoff and the main contracting responsibility going to Ssangyong Engineering and Construction. Within the Marina Bay Stands is a hotel with 2,561 rooms, a convention and exhibition centre worth 1,300,000 sq foot, a shopping mall called The Shoppes, a museum, two big theatres, seven restaurants boasting celebrity chefs, two pavilions of crystal which float, a rink for ice skating, and lastly a casino which has 500 tables and more than 2,500 slot machines. On top of the building complex is a skywalk area called the SkyPark which has a length of 340 metres and can accommodate around 3,900 people. Alongside, there is a swimming pool 150 metres long which has been made on a cantilever platform known to be the highest in the world.

Amongst the attractions of the Marina Bay Sands is an ArtScience Museum which is shaped like a lotus. It is known to have a retractable roof which can collect rain water and stages laser shows in night. The swimming pool of the rooftop SkyPark has a vanishing edge which is at a height of 191 metres from the ground. The pool alone holds 376,500 gallons of water. The SkyPark has a disc KU DE TA and an observatory on the cantilever part which gives a panoramic view of Singapore.

The retail space of the Marina Bay Sands called The Shoppes boasts of a space for 300 shops and boutiques for brands like Ralph Lauren, Chanel, and Prada to name some. There is also a canal running through the retail space similar to the Venetian running in Las Vegas Sands. The two crystal Pavilions are certainly big attraction points of the Marina Bay Sands. Within them are two famous nightclubs named Avalon and Pangaea. Because of its volume and splendour, the Marina Sand Bay hosts a number of prestigious events too.