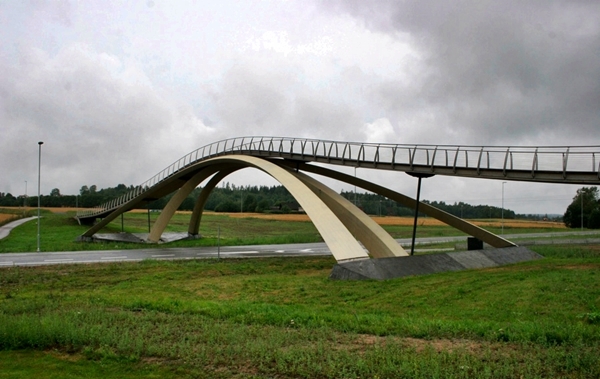 It took 500 years to extract and realise the vision of the famous renaissance artist Leonardo da Vinci and to build the Leonardo Bridge in Norway which he had originally designed in order to connect Asia and Europe over the Golden Horn and whose construction was prevented by the Turkish sultan as he doubted the feasibility of the project.

Going through the many years old notebook of the famous artist, it was observed that many of his engineering designs were revolutionary and much ahead of their times. Amongst these designs, in 1501, he made the plan for a 240 metres single span bridge which could be built over the Golden Horn. As the builders of that time were not equipped to give shape to such a design, it remained shut in the notebook till 300 years after which a Norwegian artist by the name of Vebjorn Sand discovered it in an exhibition of Leonardo’s work and after proposing it to the Norwegian Public Roads department got a much toned down version constructed on the highway near the Norwegian town of As. This highway links the cities of Oslo and Stockholm and was given life by architect Selberg.

The principle which Leonardo da Vinci used in making the design for the bridge is similar to that of the pressed bow and parabolic arches which together combine to give a strong integrity to the structure. The current Leonardo Bridge, opened in 2001, is a much smaller version of the huge concrete structure once designed and is usually used by cyclists and pedestrians. It is made of stainless steel and laminated wood. It has a length of 108 metres and is 40 metres wide. Its height is 10 metres and in place of the huge arch, here there are three glulam beams which form an arc above the highway road. It is on top of these beams that passersby walk or ride.

Though it is much toned down version of the actual design but, the Leonardo Bridge of Norway appears beautiful, symbolical, and graceful. It is first execution of any civil engineering design made by the legendary artist. However, as mentioned in the website of the Leonardo Bridge Project, the Turkish government have intentions of giving shape to the original design by building a massive bridge on the Golden Horn as per the design of Leonardo da Vinci.

As per the website of the current Leonardo Bridge, it is called a non profitable public arts project which intends to build useful friendly foot bridges on the basis of designs made by the local artisans.