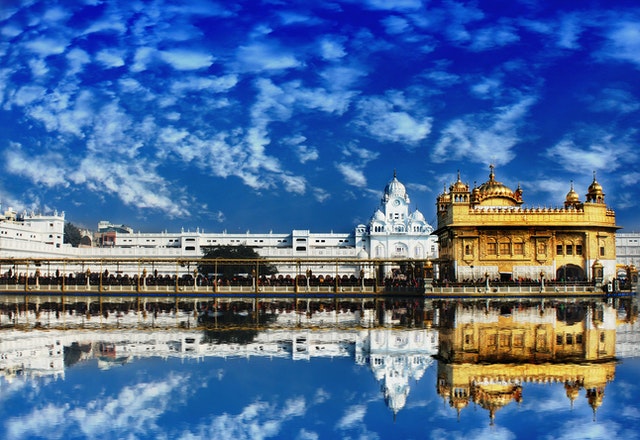 The Harmandir Sahib or the Darbar Sahib, popularly known as the Golden Temple, because of its look, is the most revered destination of the Sikh religion in India. The Sikhs across the world too specially come to India to pay their respect in this place of worship. It is located in the city of Amritsar in India and dates back to the 16th century when the fifth Guru of Sikhs, Guru Arjan Sahib brought it to a completion and also placed the completed version of the holy scripture of Sikhs, the Adi Granth, in the temple.

While building the Golden Temple, Guru Arjan Sahib kept in mind that it should convey the religious belief of the Sikhs as per which all religions are accepted to be at par and the temple is accessible to people from all cultures and walks of life. For this reason he got the foundation stone laid by the Muslim saint Hazrat Mian Mir ji, then unlike the Hindu temple architecture he got the Golden Temple built on a lower level instead of raising its height, and lastly unlike the other Hindu Temples he made four entrances for the Golden Temple so as to open it for people of any caste, gender, race or religion.

It was in the nineteenth century that after protecting Punjab from the external attack, Maharaja Ranjit Singh got the upper floors of the Golden Temple gold plated from which it got its name. The Golden Temple stands on a platform of 67 feet in the midst of a water tank called the Sarovar. The water of this tank is considered to be holy and so is also called ‘Amrit’. The area covered by the temple is 40.5 ft square and has doors in all four directions. The doors are then connected to a bridge to reach the main premises. This bridge in return is connected to a path round the main shrine leading to the ‘Har ki Paure’ (steps of God). The architecture is a mix of both Hindu and Muslim style and indicates towards communal harmony.

The Golden Temple also commemorates the contributions of all the Sikh soldiers who died fighting the World Wars I and II. The entire structure is an exquisite piece of art with beautiful gildings and marble work. The temple is a place of purity and therefore there are some behavioural restrictions for those entering the premises. Some of these conditions are like removing shoes and washing feet at the time of entering, No alcohol, meat, or cigarette consumption while being in the shrine, proper dress with covering the head, and also sitting on the floor so as to convey the respect to both the Adi Granth and God. The best times of visiting the Golden Temple are Vaisakhi and Bandi Chor Divas when it is beautifully decorated.

The Golden Temple complex underwent substantial damage at the time of Operation Blue Star which happened to stop the Dharam Yudh Morcha and also claimed the lives of many Sikhs.