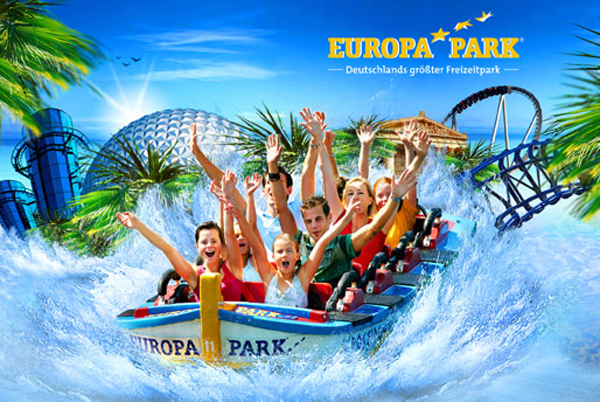 If you are on a Europe trotting spree then after Paris, Germany should be your next halt because, for adventure seekers, here is a chance to enjoy eleven roller coasters in the country’s biggest theme park which is also the second largest in the continent and is called Europa-Park. Situated in a place called Rust it falls on the south western part of Germany and has already reached a tourist count of 4.5 million in 2011.

Occupying 90 hectares of land, the Europa Park gives options to an entire family presenting activities which have adventure, thrill and also entertainment. Like the other big theme parks, here too there are theme regions along with pleasant architectural specimens, interesting food options, and other shows. It is under the ownership of Mack GmbH & Co who have specialised over years in making vehicles like previously circus wagons and currently roller coasters. Europa Park has been in existence since 1975 and has been entertaining millions of visitors since 1978.

The themes of the Europa Park include Enchanted Forests, Adventure Land, Children’s World also known as the Viking Land, Germany, Russia, Italy, France, Scandinavia, Portugal, Spain, Holland, Switzerland, Greece, England, Austria, Iceland, and lastly the Europa-Park Resort. Amongst all the themed countries, Italy was the first one in the list. Each of the countries has their own specialities like the experience of seas in Greece, the thrill of riding in to the Stars in Russia and so on. All these help in increasing the tourist flow year on year and generate revenue of about EUR 300 million annually. It is for this reason that the number of hotels in the process of construction has also got increased so as to accommodate the crowd during the peak seasons. The best season to visit the Europa-Park is known to be summers as during this time the gates are open from 9am to 6pm unlike the winter timings of 11am to 7pm.

In the recent times, it is known that the 12th roller coaster of the Europa Park is under construction and is expected to get completed by 2014. This ride is known to be coming up in the theme of the Enchanted Forests and is inspired by the film on Arthur and the Invisibles. The upcoming events of the Europa-Park include its 40th anniversary in the year 2015 and also the creation of the water park whose completion is to be marked in 2016 or 17. The upcoming hotels which are to be completed in the Europa-Park Resort are being planned to be of lower budgets unlike the existing ones which are all 5 or 4 starred.

Thus, for an all round entertainment for an entire family Europa-Park is one of the ideal destinations to be ventured in.