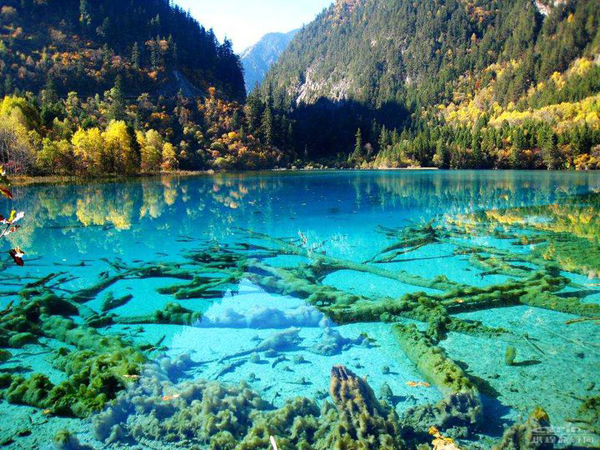 Have any one of you ever been to a fairyland? If not then, I am sure you have not yet paid a visit to the Crystalline Turquoise Lake in the Jiuzhaigou National Park of China. The best part of this destination is that it is hard to believe that one of the most populated countries of the world hides such a virgin and pure place like this. It is in order to preserve this natural beauty of Jiuzhaigou National Park that the Chinese government has turned it in to a nature reserve which draws loads of tourists to the northern part of Sichuan in China.

The national park is located within a valley which is situated amongst the Min Mountains standing by the side of the Tibetan Plateau at a height of 2,000 to 4, 5000 metres. Covering an area of 72, 000 hectares, the things that make the valley so picturesque are its waterfalls which flow in multiple layer, the Crystalline Turquoise Lake, the peaks around which during winters get covered with snow. It is because of the beauty of all of these that the UNESCO turned the place in to a World Heritage site in 1992 and then in to a World Biosphere Reserve in 1997.

As the word Jiuzhaigou in Chinese means the “Nine Village Valley”, the Jiuzhaigou National Park is named after the nine Tibetan villages which fall on the way of reaching the park. The Crystalline Turquoise Lake which is one of the main attractions of the Jiuzhaigou National Park gets its uniqueness from its crystal clear water which seems to be untouched by any living presence for decades. Every year nearly 200, 000 people visit the Crystalline Turquoise Lake; however this has not diminished the clarity of the water to even the least.

It is also known as the Five Flower Lake of China. A myriad of colours, such as turquoise, blue, green, yellow, and so on makes the Crystalline Lake exceedingly beautiful. Added to these are the trunks of the trees which have fallen in the lake to make a criss-cross pattern on the bed.

As the lake is surrounded by mountains and a variety of foliage, the crystal clear waters of the Crystalline Turquoise Lake reflects the nature around and creates a spectacle out of it. It is perhaps because of its surreal beauty that the people of the nearby villages have also attached a number of myths to it.

The Crystalline Turquoise Lake and Jiuzhaigou National Park together end up drawing a huge number of tourists every year. It was last estimated in 2004 that nearly 7,000 people visit the place on a daily basis. This number rises to 12,000 during the best seasons of the year. Though accessing the Jiuzhaigou National Park by road is a difficult task but, most tourists take bus rides while going one way and come back on foot the other way. However, it is good to remember that this path is always prone to earthquakes and landslides.