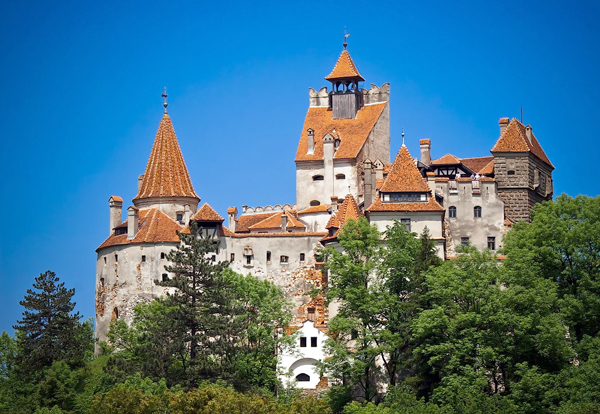 The story of The Count Dracula is known to more or less everyone across the Globe and a general curiosity which has survived through ages is regarding the castle of the Count Dracula. The Bran Castle located close to Bran and also to Brasov in Romania has gathered legends over ages to be the “Dracula Castle” along with some others in Poenari and Hunyad also in Romania. The other importance of the fortress of Bran Castle is that it is a national monument of Romania.

The exact location of the Bran Castle is on the border of Transylvania and Wallachia. Getting partially popular due to the character of Dracula from Bram Stoker’s book, there is no direct evidence that the author created the place keeping in mind this castle. The presumed creation of the Bran Castle dates back to 1377 after which it is known that the fortress was used as defence against the Ottoman Empire in 1400s. After going through a number of hands, the Bran Castle, in 1920, was known to be a residence for the Romanian Kingdom. Queen Marie has been known to be great fond of the castle and after her demise the castle got in to the communist grip in the times of her daughter. It was again in 2005 that the castle went back to the Royal family as per the newly passed law.

After a series of contest between the Romanian government and the Royal family, the Bran Castle finally opened for public in the year 2009 post refurbishments. It now has a museum where people can see the collectibles of Queen Marie.

The construction of the Bran Castle has been done with wood and stones. By its very look, the castle gives a feel of being a protective monument which has also been used for commercial purpose at times. The initial structure of the Bran Castle comprised of the outer wall, the donjon, the round and gate towers and also an observatory tower. Many changes were made in the castle through the succeeding centuries where the fire holes of the towers and been made in to windows, addition of towers and stairs in the existing towers.

A lot of legends have been attached with the Bran Castle but though none of them have been proved still the castle continues to draw a large number of tourists across the world and ascertains that no trip of Romania can be complete without paying a visit to the Bran Castle. The best means of reaching the Bran Castle is from by landing in Bucharest which has the international airport connecting all main cities worldwide and then going to Brasov through either bus, train, or rented car. Brasov, being the second largest city of Romania is the centre of all trips where you can stay and also make a day trip to the Bran Castle by bus.

Palace of the Parliament – Bucharest – Romania

Even though the communist rule has come to an end in Romania but, the importance of the Casa Poporului or the Palace of the Parliament in Bucharest has not gone down even to a bit. It rather now serves many purposes like, holding the Romanian Parliament, having Romania’s Museum of Contemporary Art, and also having a good conference centre. There are also guided tours of the Casa Poporului which means the People’s House and it therefore stands out in the world by being the world’s largest civilian building with an administrative function.

The Palace of the Parliament got built during the times of Nicolae Ceausescu with a floor space of 340,000 sq metre. It has 1,100 rooms spread over the 12 floors alongside 4 underground parking garages which are used by the general public. The entire Palace of People is styled on a neoclassical format motifs taken from various sources. Estimates say that the People’s House has used one million cubic metres of marble, 3,500 tonnes of crystal and 700,000 tonnes of steel and bronze apart from 900,000 sq metre of wood and 200,000 sq metre of woollen carpet in order to adorn the building. It is thereby the most expensive administrative building and also the heaviest building existing on the face of the Earth by now. The Casa Poporului at one point of time was also called House of Ceauşescu in order to indicate the splendour of Ceasescu abode in opposition to the poverty of the general public of Romania.

Though majority part of the Casa Poporului remains unused but taking the conducted tours give a chance of having a look at the grand staircases, halls, salons, and conference rooms. In fact, the roof of the Palace of the People gives one of the best panoramic views of central Bucharest. If you are ready to shell out some extra money you can also have a look at the bowel of the Palace of the People. There is also a cafeteria which serves the legislators of Bucharest. The Palace of Parliament also houses headquarter of the Southeast European Cooperative Initiative (SECI) which is a body seeking the co-operation of various European governments in order to control cross border crime.

In 2008 the Romanian Palace of the People came in to limelight as it played the host to the 20th NATO Summit. If you are interested to take a tour of the world’s largest civilian building with an administrative function then make the reservations in advance as the opening hours may change in lieu with the parliament sessions. Some kind of international identification document, like passport or driving license is needed and the best way of reaching is getting down at the Izvor metro station. However, the Piata Unirii gives a better view of the Palace of the Parliament.

In the vast entirety of the European continent there are many fortresses, castle, and monuments which are worth visiting at least once in a lifetime. One such castle is the Peles Castle which is located amongst the Carpathian Mountains of Sinaia in Romania. Built on the Neo-Renaissance style of architecture, the construction of the Peles Castle started in the year 1873. Currently it is 60 km from Brasov and 135 km from Bucharest.

The inspiration for the Peles Castle was the Romanian King Carol I and it is also known to be his final resting place. He chose the location of the castle such that he can name it on the brooks which pass through the courtyard. The design of the castle was first created by a German architect named Johannes Schultz and were further perfected by another architect Carol Benesch. In between the years 1893 and 1914, the castle also got some expansions by architect Karel Liman. Such is the design of the Peles Castle that it appears to be a mixture of European style such as that from Italy and Germany which have then got merged with the Renaissance concepts.

The structure of the Peles Castle is made out of stone, bricks, and marbles and it has 170 rooms which have artworks of alpine architecture of carved wood. There is also a number of hand painted murals which depict themes taken from the cultures across the world. The other pieces of art include gold and silver plates, vases, crystal chandeliers, stained glasses, china, tapestries, and so on. One of the attractions of the Peles Castle is the collection of 2,000 paintings which are the most treasured ones of Europe. On the entrance is the huge statue of King Carol I which leads to a garden designed on the Renaissance style.  Within the complex of the Peles Castle are other buildings like the Guard’s Chamber, The Economat Building, The Foisor Hunting House, The Royal Stables, an electric power plant which made the castle to be a first one to get supported by self generated electricity.

The Peles Castle saw the Romanian War of Independence during its constructions after which though the royal family continued to live their but the rule of communism, in 1947, seized the entire property from them. Around 1953, the castle was turned in to a museum however, with the coming of Nicolae Ceausescu, the entire estate got closed. In was in 2006 that the Peles Castle, under a tryst between the Romanian government and monarchy again opened for public and now gets about half a million visitors every year.

Currently, the Peles Castle and museum holds tours of one hour in between 9am to 5pm from Wednesday to Sundays which covers all four floors of the castle. The worth visiting areas include the Honour Hall, the Imperial Suite, the Grand Armoury or the Arsenal, the Small Armoury, the Moorish Salon, the Turkish Parlour, the Florentine Room, to name some.