A good number of manmade wonders correspond to buildings which reach the summit of sky and talk to the clouds. The one which stands at the number two position in the world has its location in Sumida and is the pride of Japan. This is the Tokyo Skytree which, with a height of 634 metres, has shifted the Canyon Tower of China to the third place.

It is the second tallest building of the world and comes after the Burj Khalifa. It is used as a broadcasting centre, an observatory tower, and a venue to a couple of popular restaurants which serve fusion cuisine of Japan and France. The Tokyo Skytree is part of a commercial venture taken up by the Tobu Railway and six broadcasters from across the territories that are in turn headed by NHK. The tower is built at a place which is equidistant from both the Tokyo Skytree and Oshiage stations. The Tokyo Skytree also has an aquarium inside the building.

The main objective behind the tower of Tokyo Skytree is to help in the smooth relaying of TV and radio signals which can help the city life. Previously this job was done by the Tokyo Towers but, with a height of 333metres and getting obstructed by a number of other neighbouring high rises, it is unable to broadcast the terrestrial signals properly. The Tokyo Skytree has two observation decks at the top and got opened for public on May 2012. These two decks, at the heights of 350 and 450 metres, give a panoramic view of the entire Tokyo city. In between the two observatory decks is a gallery called the Tembo Gallery which is also known to be the “highest skywalk” in the world.

While designing the Tokyo Skytree, the objectives which were kept in mind were related to taking an approach which was both modernistic as well as keeping in mind the old notions. As Tokyo is prone to natural catastrophes such as earth quakes, safety was certainly one of the primary requirements to be fulfilled by the building. Lastly, it was also thought that the Tokyo Skytree should come up as a landmark of the city which could attract people from distant locations to pay a visit and thus energize the city.

The shape of the Tokyo Skytree has been kept cylindrical so that the entire city and river can be visible. It is told that the dampers of the tower have the absorbing capacity of 50 percent of the seismic energies. The outer colour of the Tokyo Skytree is “Skyline White” which comes from the traditional blue white colour of Japan, also called aijiro. The entire tower is also adorned with illumination effects with the help of LEDs and the colours used are sky blue and purple.

Tokyo Skytree can be reached through buses from various locations of Tokyo like Tokyo Station, Ueno Station, Tokyo Disney Resort, and Haneda Airport.

The land of the rising sun – Japan – with its rich culture, history, and believes – has always attracted loads of tourists from across the world. One of the famous tourist destinations of Japan is the Great Buddha of Kamakuru who sits in the open air of the Kōtoku-in Temple in Kamakura, Japan.

Magnificence and History of the Great Buddha

As per history this statue was built after the giant wooden statue of Buddha got destroyed in 1243 by a storm. Following this, the Buddhist priest Jōkō of Tōtōmi gave the suggestion of creating another statue and this time with bronze. The statue at that time was again built within a temple but it the following years heavy natural lashings of rain and storm destroyed the temple and ever since then, from 1495, the statue has remained in the open air. At times some doubts have also been raised as to whether the current statue is the same as the one which was created in 1252.

The statue of the Great Buddha of the Kōtoku-in temple is known to be gilded and there also have been found traces of gold near the ears of the statue. The cast of the statue was either created by Ōno Gorōemon or Tanji Hisatomo, both of whom were renowned casters of that period. As the statue is hollow, it is possible for the visitors to see inside it and it is because of this reason too that a number of graffiti are found inside the Great Buddha.

A number of catastrophes, the last being The Great Kanto Earthquake of 1923, have tried to cause harm to the statue of the Great Buddha but, every time the followers have been able to save the huge piece of art and belief.

The Great Buddha of the Kōtoku-in temple is revered by the Buddhists all across the world and is also frequented by many who come to pay their respects to the Lord. The easiest way of reaching the Great Buddha is to walk for 5 to 10 minutes after getting down at the Hase station which is the third station when you take the Enoden railway line from the Kamakura station. Though the statue is open for public visit throughout the year but, there are specific visiting hours and also an admission fees is required to see the statue both from outside and inside.
Any trip to Japan is incomplete without paying a visit to the Great Buddha of the Kōtoku-in temple. 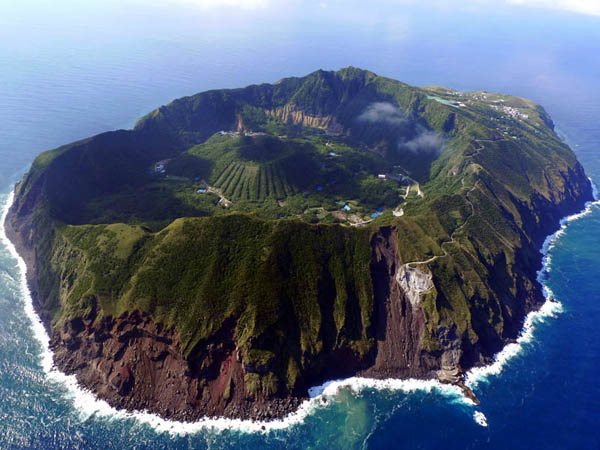 Being a super power, much is talked about Japan, its geography, people, culture, tourism, their hard work, toil, and so on. Yet not all is known, because still not many people are aware of the Aogashima tropical islands of Japan where some people still prefer to live within the crater of a volcano. The Aogashima volcanic island is located on the Philippine Sea and though situated at a distance of 358 kilometres from the capital of the country; the administrative powers of the island still lie with Tokyo.

One of the specialities of the Aogashima volcanic island is its low and gradually lowering population which makes it as one of the isolated inhabited islands of the Izu archipelago. In the current times, about 200 brave family stay on the island braving the uncertainties of nature and circumstances. Amongst its other specialities is certainly its structure which is made up of one big volcanic crater within which is situated another small volcano. Though the Aogashima volcano last erupted in 1780s, it is still known to be a Class C active volcano.

Emerging from the sea the height of the bigger rim is about 200 to 420 metres above the sea. It is known that the formation of the island is the result of the overlap of four calderas under the sea. On the rim of the bigger crater there is a high peak which is the highest point of the island as well, called the Otonbu which is located at a height of 423 metres above the sea. From here one can get a glimpse of the entire volcanic island.

As reaching the volcanic island of Aogashima is not very easy and neither does it have too many attractions, which is why the tourist inflow to this part of the world is also low. The only two ways of reaching the island is either by a boat or helicopters of the Tokyo Island Shuttle Service which started in the year 1993. Both the options are available from the nearest island whose distance is 60kms from Aogashima. While the frequency of both the services is very uncertain as the visibility to the island is often poor, there are also limitations in carrying people through the helicopters specially.

The island of Aogashima being one of the smallest villages of Japan also does not often too many options of leisure and entertainment. The only thing which you can expect to do is to enjoy the calm and serene tropical environment. In the centre of the island is a geothermal sauna which people use as a free source of gas to cook. It is because of this that Aogashima can offer steamed vegetables, potatoes, or eggs as their culinary specialities. Whatever small numbers of people visit the location enjoy the place for having a sauna or hot bath.

Already the population of Aogashima is going down and before it gets totally forgotten, the place, being a wonder in itself, is uncertainly worth a visit.