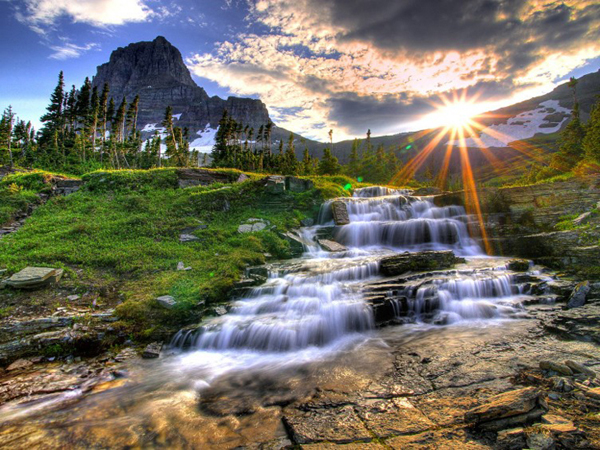 If you have not had the experience to see pristine nature in a well preserved national park then there is no better place on Earth than the Glacier National Park which is located in the US state of Montana which is on the border of US and Canada. It is also here that the American and Canadian parts of the Rocky Mountains greet each other and give shelter to a numerous species of plants and animals.

The total area covered by the Glacier National Park is about 1,000,000 acres and it has about 130 lakes and 1,000 different natures of plants and animals. This region is also known as the “Crown of the Continent Ecosystem”. After the creation of the Glacier National Park, the Great Northern Railway constructed a number of hotels in the area which were named National Historic Landmark. Thereafter, when the Going-to-the-sun road got completed in the 1932, it was named as the National Historic Civil Engineering Landmark. Now watching the Glacier National Park from this road itself is a reason for which people should visit the place.  From here the view of the turquoise coloured lakes, the glaciers, and the uneven mountains simply appear to be stunning.

The Glacier National Park, being a protected land, is home to a number of endangered and rare species of plants and animals. Amongst animals one can see the huge mammals like grizzly, and mountain goat and rare ones like wolverine, Canadian lynx and so on. There is a variety in the species of birds, reptiles, and amphibians too. Amongst trees, the Glacier National Park is home to the red cedar and hemlock. The vegetation includes both prairies and tundra which inhabit the different parts of the national park. Though, forest fires usually do not happen in the park but, in 2003 some 13% of the park did get burnt.

Apart from visiting the park, the other best experiences of the Glacier National Park have to include trips of the 52 miles Going-to-the-sun road which is the only one going inside the Glacier and hiking though the trails to experience nature. Driving through the road gives amazing scopes of taking photographs and feeling the adrenaline rush. There are also historic wooden boat rides which take place through the numerous lakes in the Glacier National Park.  During mornings, evenings, and spring times bicycles are also allowed on the Going-to-the-sun-road.

As mentioned previously, keeping in mind the inflow of tourists there are several lodging facilities in and around the Glacier National Park. The two within the park are named Many Glacier Hotel on Swiftcurrent Lake, and Lake McDonald Lodge. These provide authentic forest experiences and also give the dining provisions as per individual choice. The airports which are closest to the national park are Kalispell in Montana. There are also trains which stop on the East and West parts of the Glacier. Lastly, road tours are also available to the park through coach companies like White Motor Company, Glacier Park Inc, and so on.