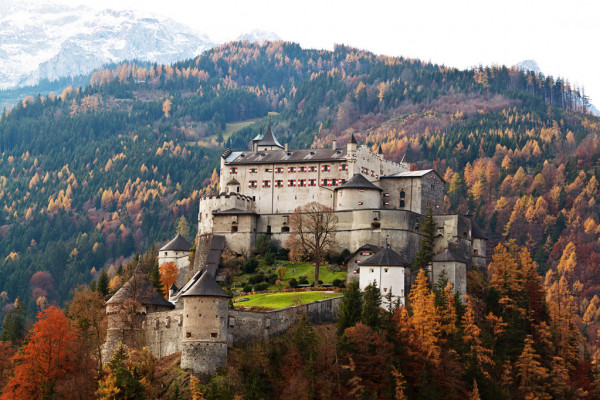 Perching up 623-metres atop the valley of Salzachtal and surrounded by the Alps, is the Castle of Hohenwerfen which has withstood the test of time for over 900 years and brings to us the sagas of medieval defences and wars. The Hohenwerfen Castle is situated at a distance of about 40 kilometres from Salzburg and is known to be the “sister” of the Hohensalzburg Castle of 11th century.

When Was The Hohenwerfen Castle Built?

Hohenwerfen Castle was built in 1077. The preceding years were rife with political unrest with the Investiture Controversy leading to almost 50 years of civil war in Germany. It became necessary to build a fortified site for the Archdiocese and under Archbishop Gebhard (c. 1010 – 15 Jun 1088) who was the Archbishop of Salzburg from 1060 until his death, the decision was taken to build Hohenwerfen Castle.

Hohenwerfen is a sister castle to the Hohensalzburg Fortress which the Archbishop also constructed.

Though the neighbouring areas of alpine slopes around the Hohenwerfen Castle of Austria, also known as the “Castle of Adventure”, appear to be of exquisite beauty but the stern face of the castle walls convey its impenetrable nature in the very first look. It is evident that the castle has seen a number of sieges and blood sheds.

Over the ages, while it has faced a number of attacks and has been instrumental in protecting important people like the archbishops and archdukes, the Hohenwerfen Castle has also been the dungeon of death for a number of prisoners and the ground floor has been used as a state prison too.

In the year 1931, the Hohenwerfen Castle faced a lot of damage due to a fire from which it was restored 1938. Thereafter, post the World War II it was used for training the Austrian police till 1987.

The latern-shaped structure housing the four tonne bell was originally a lot higher, approximately 6 meters higher than it currently stands. This reduction in height was under the order of the Archbishop Kuen-Belasy in 1568 in order to safeguard the tower from cannon balls.

Till this day this Hohenwerfen Castle plays an important role in educating visitors about the past of Austria. It has not only preserved the medieval weaponry but, has also kept alive the history of the feathered hunters of the region in Austria’s first ever built falconry centre and museum.

In the current times a number of events keep happening in the Hohenwerfen Castle which generates a lot of tourist interest. There are guided tours of the castle which takes people through the chapel, kitchens, places where the armoury was kept, the battlements, the bell towers, and so on. At times the weapons of the past ages are also put on an exhibition.

In addition to these amusing trips, are also the festive weekends, theatres, falconry demonstrations, saga trails, and other such initiatives which take the tourists in to the medieval ages and gives them a firsthand experience of the same. As these events keep on happening throughout the year you can always expect to enjoy something or the other whenever you plan a trip to the Hohenwerfen Castle.

The popularity of the Hohenwerfen Castle is evident from the fact that it has also been filmed a couple of times for movies like ‘Where Eagles Dare’, ‘Just Married’, and TV series ‘The 10th Kingdom’.

In case you feel the absence of adventure in your life, quickly gather all the tour information about the fortress and plan a trip to Austria to visit the Hohenwerfen Castle with your family and friendly to have an amazing historic and natural trail.

Book direct with the castle itself and choose from various ticket types, below is an image showing the options:

Below is a short video which manages to capture the scenery the Castle is surrounded by.

The page you requested could not be found. Try refining your search, or use the navigation above to locate the post.