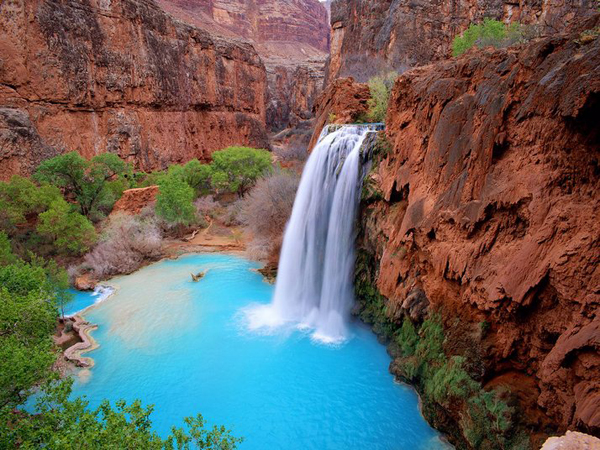 Looking at the beauties of nature, it seems they are the creations of some master designer or craftsman. After visiting the Havasu Falls of the Grand Canyon in Arizona, USA, this thought gets further strengthened. It is because of the striking beauty of the blue waters freely falling from about 100 feet in between red rocks makes the Havasu falls the most visited and beautiful part of the Grand Canyon.

The Havasu falls are located at a distance of 1.5 miles from Supai in Arizona, USA. The water which falls from a height of about 90 to 100 feet then gets collected in a pool which has a white sandy beach and lots of cottonwood trees which give a warm shade and a nice place to relax. The look of the place seems to be like an oasis in the dry Arizona.

As the water of the Havasu falls is high in mineral content the colour of the pool constantly keeps changing. The content of calcium carbonate and magnesium in high in the water and due to the precipitation of the calcium carbonate on the rocks and branches the formation of pools and dams take place. The blue colour of the water happens because of the magnesium content and the more it increases the bluer the water becomes. The temperature of the water primarily remains at 70 degrees Fahrenheit all across the year.

The bit of research in to the history of the Havasu falls indicates to the age old belief that nature keeps changing itself. Before 100 years, the Havasu falls was a 200 foot wide curtain of a waterfall with a different name as Bridal Veil Falls. It was post 1910, after a big flash flood in the Grand Canyon that the water started flowing in its current pattern and the name too got changed to Havasu Falls. Even today, in spells of time period, you can notice changes in the pattern of the falling water or the surrounding rocks.

There are a couple of ways in which you can reach the Havasu Falls. If you are a trekking fan then you can drive from the nearest town Seligman and then walk down for 1.5 miles to reach below the Hualapai Canyon. This is a steep descent after which you again need to climb out of the canyon however; the trek this time is relatively flat. The other way of reaching the falls is from the camping ground which is at a distance of about a quarter mile. In between, you can also enjoy the Lower Navajo Falls and other sources of fresh water where you can take a plunge. There are also a number of small and big pools and streams on the way to the campground.

All the falls of the Havasu creek are fine to be visited all round the year. They, including the Havasu Falls, are a part of the Havasupai Indian Reservation as tourism is the industry they primarily focus on now.

The cantilever Grand Canyon Skywalk is situated at a height of 4,770 feet and the height difference between the bridge and the river is 1,160 feet. The concept of this kind of a bridge on the Grand Canyon was given by David Jinohipadhus who was an entrepreneur of Hualapai tribe and was brought in to shape by architect Mark Ross Johnson. Starting from the supporting wall of the Grand Canyon, the platform of the Skywalk protrudes out till 70 feet. It has a width of 65 feet and the anchors which support the bridge are made of concrete and high strength steel. The flooring of the Skywalk is made of low iron glass and so is the railing which is made of glass and is 5 feet 2 inches tall. The entire structure of the Grand Canyon Skywalk is so designed such that it can stand the high speed winds at that height and also withstand the seismic movements.
According to the Hualapai Indian Tribe, the Grand Canyon Skywalk is to be turned in to a complex which is supposed to have a museum, theatre, a VIP lounge, gift shops, restaurants and other leisure option. The cost which went in to the making of the Grand Canyon Skywalk alone was $31 million and it is referred to as just a cornerstone of the whole Grand Canyon West project. With this project the Hualapai Tribe aims to put about 9,000 acres of land to use which can attract more number of tourists to the region so that the factors of employment of the people of the tribe and also the raising of finance for the maintenance of the place can be taken care of.

With such a big project in foresight a number of concerns regarding the threat to the national treasure are being raised by the environmentalists of Arizona and also some earlier officials of the Grand Canyon National Park. However, the people of the tribe have their own defence to counter these arguments.