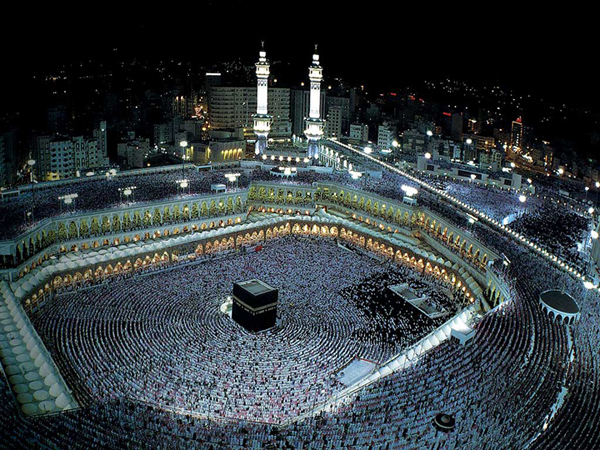 The Masjid al-Haram in the city of Mecca of Saudi Arabia is known to be the most sacred place of the followers of Islam all over the World. It is also the largest mosque in the world and surrounds the Kaaba, which is again one of the holiest Islamic locations. Such is the significance of Kaaba that the Muslims across the World offer their prayers in the direction of the monument. It is said that every Muslim should once try to make a Hajj pilgrimage in his or her life.

The entire covered area of the Masjid al-Haram is 356,800 sq metres which could earlier hold about two million devotees in the inner and outer praying areas at the time of Hajj. The oldest part of this mosque dates back to the 16th century where unlike the other mosques both genders can offer prayer together.

The inner part of the Masjid al-Haram is a rectangular courtyard which has covered praying areas and also holds the various sacred rituals of the Kaaba. Within this courtyard there are two main holy sites namely, the place of Abraham, the stone which, as per the Holy Quran, was the first building block of Kaaba and the Zamzam which is a holy spring. It is said that the construction of Kaaba was first taken up by the holy prophet Abraham to build a place for worshipping Allah.

Over the decades various sects have taken up the responsibility of renovating the Kaaba and the Masjid al-Haram. The current form of the mosque is a result of all these. The recent most renovation initiative was taken up in the year 2007 by King Abdullah Ibn Abdul Azeez so as to increase the capacity of the mosque. Other modern amenities were introduced in the premises of the Masjid al-Haram in order to reduce the problems of the worshippers during the time of Hajj. These include internal and external air conditioning systems, escalators, passage ways, and so on. After these changes the mosque can now accommodate up till 820,000 worshippers.

However, this initiative of expanding the Masjid al-Haram and the Mecca has also faced a lot of criticism as it asked for the demolition of a number of old building and thus has been termed as harming the heritage of Islam. The Masjid al-Haram also came in to limelight when it became the centre of rebellion against the royal family of Saudi Arabia and got seized by a number of Islamic militants. This led to a bloody battle in which the government got back its control of the mosque and freed it from further bloodshed.

The mosque of Masjid al-Haram receives the highest number of footfalls during the Hajj pilgrimage times of the Islamic calendar. The pilgrimage gets fulfilled only when the devotees are able to walk around the Kaaba for seven times in the anti-clockwise direction. This process is called the Tawaf and it is also done during the other holy time of the calendar called Umrah.