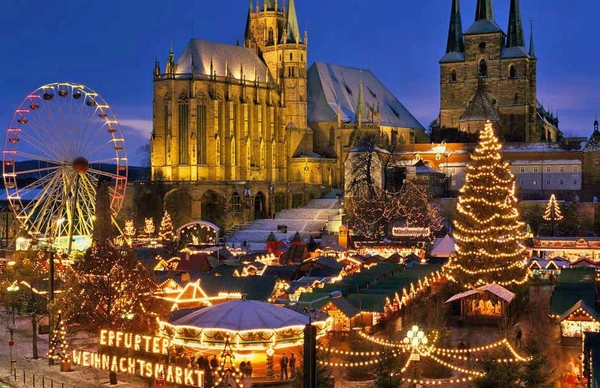 15 of the most beautiful Christmas Markets in Europe

With the month of December springing up on the calendar, alike the family and loved ones, excitement is also about the smell of cinnamon, ginger bread and wine. You tend to welcome the brightly lit Christmas markets on the street corners where mundane life comes to a standstill.

The origin of Christmas Markets may have happened in Germany and Austria but now, it has spread across Europe. Here are some Most Beautiful Christmas Markets in Europe which add a zing to Christmas and attract millions of tourists across the world. The starting point of these were Vienna, Bautzen, and Dresden early years like 1294, 1384 and 1434 which then over time got spread far and wide.

Celebrated in front of the Koln’s cathedral, this is one of the Most Beautiful Christmas Markets in Europe which brings almost 2 million tourists every winter. With its Gothic style backdrop, the place becomes a scene straight from the lands of fairytales.

This is a theme based arrangement where traditional practises are combined with particular themes which dominate the setup and the attractions thereby making it one of the unique and most beautiful Christmas Markets in Europe. For instance, 2012 reflected the Meeting of Cultures which guided the events accordingly.

With its enthralling backdrop composed by historical buildings like Cathedrals of Henry the Lion or Dankwarderode Castle this is no doubt one the Most Beautiful Christmas Markets in Europe. As it is also a place where people can excite their taste buds with a variety of food so, it is a favourite with hundreds of tourists and locals.

In the festivities of Christmas, this medieval Flemish city glows as a joyous Christmas party with its ice rink and lavish offerings for Chocolate lovers.

The Christmas Market organised in Franziskanerplatz pulls crowd with its decorations, food display, sweet offerings, and hobby and handcraft options.

It’s a small town and perhaps that makes the Christmas celebrations of Colmar all the more beautiful. The light displays against the old buildings, the local shows and the cordiality of people fills the air with a magical essence.

With its blend of the traditional and the modern, there is something or the else for both young and old along with being a scenic paradise which makes Innsbruck one of the most beautiful Christmas Markets of Europe.

Celebration here continues for ten days and offers a plethora of food, handicrafts and options for shopping.

All adorned with ornaments, traditional potpourris, and displaying a range of authentic Czech Christmas cookies, the Christmas market of Prague is perfect beyond words.

Enjoying the Riga Christmas Market in the square of the Old Town Hall is a ‘never before’ experience, especially for children who are the focus of the event. There are theatre acts of Dolls, animal corners with creatures brought from country sides and many similar attractions which may have been read about only in the fairytale books.

An attractive city centre turns irresistible when the wooden huts of the Christmas Market display their offerings.

You can take a pick out of the four Christmas markets of Skansen, Old Town, Djurgarden, and Kungstragarden. The Old Town is known to have an edge with its old architecture and a wide array of food, drink, and other Christmas offerings.

It seems that the city centre of Tallin enjoys the blanket of snow when the little huts sell their goodies and the kids simply love the sight of the huge Christmas tree standing in the centre.

A native in the practise, Vienna dolls up its every square during the festive time and comes up with a total of eight Christmas markets.