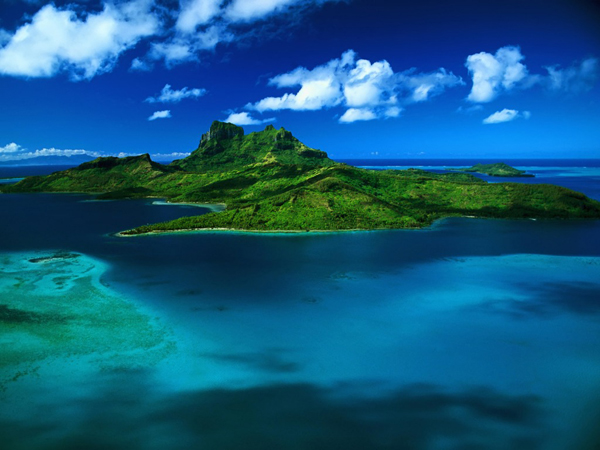 Romance is a feeling which blooms manifold when you get an appropriate surrounding to express it. And if those surroundings come in the form of the “best island in the world” Bora Bora, your love is bound to cross all boundaries.

Located on the south Pacific, Bora Bora Island is a part of the Leeward Island of French Polynesia which are under the control of France. The actual name of the island was Pora Pora which in the ancient Tahiti language means the “First Born”. After Captain James Cook first sighted and landed on the island, he could not understand the Tahitian ‘P’ and mistook the name of the island as Bola Bola. The island is located at a distance of 230 kilometres from Papeete and is adorned with barriers reefs and traces of two extinct volcanic mountains by the name of Mount Pahia and Mount Otemanu.
Because of its unbelievably beautiful surroundings and refreshing tropical vegetation, the Bora Bora Island is also a favourite tourist destination and is a home to a number of tourist resorts as well.
The population of the Bora Bora Island is estimated to be about 8,880 with the natives mainly being of Tahitian origin. Whatever is produced from the sea is called to be the produce of the Bora Bora Island. Vaitape is the major city of the Bora Bora Island and is located on the western side of the whole island.

Surrounded by the emerald waters in which various coloured fishes display a dazzling show, the white sand beaches of the Bora Bora Islands appear like pearls strewn all over. On one side of the island is the stern and mighty Mount Otemanu which stands majestic amongst the clouds. Lush green coconut trees are all across the island making it a hue of blue and green all over. The beauty of the island reaches its peak when the slopes gets covered with bright hibiscus which makes turns the island in to someplace which appears in fables.
As the economy of Bora Bora is totally dependent on tourism so, utmost care is taken in this field so that more and more people get attracted to pay a visit. The romantic getaways which are situated on the Bora Bora Islands know the choices of the tourists and so always remain equipped to provide them with the much desired privacy and accommodation in the form of overwater cottages which have thatched roofs yet contain all modern amenities. Over the years as the number of tourist couples have risen in the Bora Bora Island, the quality of comfort and provisions have also been polished more. The cottages are also offered for a range of prices, starting from an affordable range and going up to very expensive and luxurious ranges.
The connectivity to the Bora Bora Airport is available through the flights of Air Tahiti which start from the Tahiti airport and a couple of other island airports.