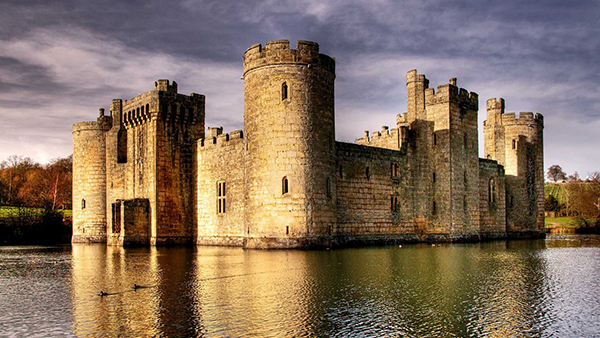 One of the most appreciated castles of England; the Bodiam Castle is a 14th century relic which is surrounded by a moat. Located in the East Sussex part of England, the Bodiam Castle was built by Sir Edward Dalyngrigge in between 1385 and 1388. He was a knight of King Edward III and was there during the time of the hundred years of war when England was frequently attacked by the French. The Bodiam Castle was the family home of the Dalyngrigge family which was converted in to a castle so as protect the people from the invading French armies.

Sir Dalyngrigge inherited the Bodiam Manor after he married in to a family which owned the land. It was here that during his knighthood he built the Castle on a design which was prevalent at that time. Built on a quadrangular plan, the chambers of the Bodiam Castle are there both on the interior and the exterior side. As it focused on providing external defence so, there are towers on the entrance and also on the four sides of the castle which have crenellations on top of them. In between there in a central courtyard and on top of the tower of the main gate there three coats of arms.

At one point of time there were a number of waterways around the Bodiam Castle but eventually only the moat exists now which still contributes to the beauty of the structure. However, in reality the moat was only a sewer for all the toilets of the Bodiam Castle. After the Dalyngrigge line got exhausted, the Bodiam Castle first went to the Lewknor family, then to King Richard III, and thereafter a number of changes in the ownership, the castle was finally handed over to The National Trust by Lord Curzon in the year 1925 since when it has also been opened for general public.

In the current times though the exterior is almost intact but much of the interior of the Bodium Castle has fallen in to ruins. However, there are some parts, like the kitchen, the buttery, and the cellar, which can still be identified. The remains of the interior parts are still in the manner that if needed they can help to recreate the entire plan of the castle. There is also a chapel and the accommodation facilities for the lord and his family. As it is glorious remains of the English past, the Bodiam Castle thus attracts a number of tourists of various ages. There are school excursion trips to the area in order to create awareness of the past.

For the tourists in the current times there are visiting timings and the entries are paid. It is good location for family outings as there are number of leisure facilities like food, gift shops, toilets, children rooms, and so on. The area has a car park so that visitors can go with their own means. There are facilities for wheel chairs and buggies for the convenience of the visitors. It is thus one of the loved destinations of England.