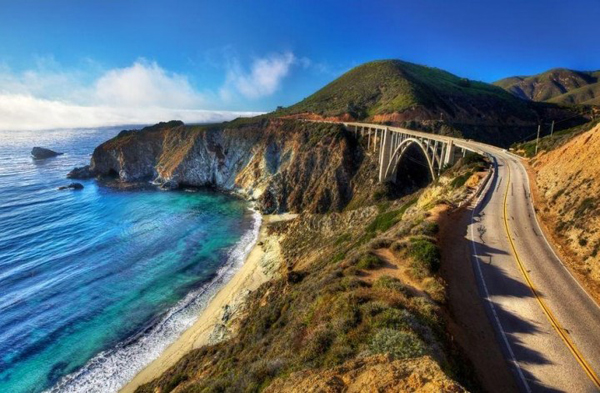 It is usually observed that while most of the challenging engineering feats across the world provide substantial contribution in easing the life of the neighbouring people, they also become samples of human ambition and manmade objects of beauty and grandeur. Perhaps that is the reason that the Bixby Creek Bridge, also called the Bixby Bridge, stands as one of the photographers’ delight for those visiting this part of the Pacific Coast.

The creation of the Bixby Creek Bridge happened in 1932 and since then it has been of immense help for the people of Big Sur, in California, USA. You can have a chance to see this bridge by driving 120 miles from San Francisco on the southern side. Once you reach the location you can also understand its importance for the people of the Big Sur who found it extremely difficult to maintain connection with the rest of the world during the winter times only on the basis of the Old Coast Road which often becomes non-commutable. After the completion of the Bixby Creek Bridge, they were able to get the necessary amenities like water and food.

There is yet another worth mentioning fact about the Bixby Creek Bridge which says that, with a length of 320 feet, it is the longest concrete arch bridge in California. And, because of its grand design and also the neighbouring scenery, it becomes a pleasure for the eyes to see the bridge. It is also a part of the Californian State Highway Route 1 and was constructed by a construction company of San Francisco namely the Ward Engineering Company. The total money which went in to the construction of the Bixby Creek Bridge was about $199,861.

The creation of the Bixby Creek Bridge was many times threatened by natural inconveniences like strong winds, and high waves and it required the workers to use 45,000 sacks of cement to bring the bring to a solid standing. 600,000 pounds of steel was also use to build the reinforcements. Construction material for the Bixby Creek Bridge came from Big Sur, San Andreas, and also from Davenport which is based close to Santa Cruz. In the beginning, the bridge had only one lane to be used for vehicles. However, in 1956 work was once again done on the bridge to make it a proper two lane road which got labelled as State Route 1.

Over the years a number of tests have been done on the Bixby Creek Bridge so as to test its capacity to bear load and other natural challenges like earthquakes and others and measures were taken keeping in mind the point to keep the historical structure of the bridge intact. Now it is rendered fairly capable of bearing a good amount of load. It stands as a symbol for California and has also got a wide media coverage over the years featuring in television programs. It also appeared on the Express Stamp which came out in the year 2010.