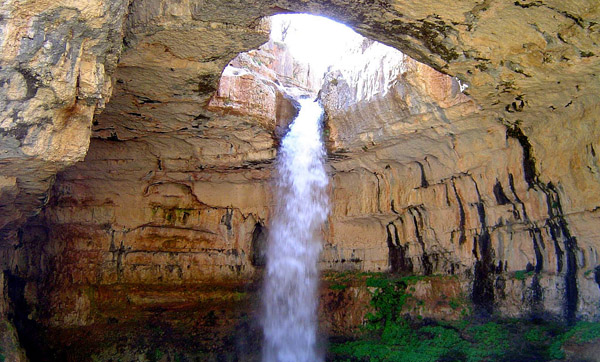 Nature displays its manifold wonders in most unexpected formations throughout the globe. The Baatara Gorge Waterfall is a formation which re-establishes this widely known truth once again. This unusual waterfall, which is mainly visible during the ice melting months of March and April, is located in the Balaa village which falls in between the Lebanese cities called Laqlouq and Tannourine. The location of the Baatara Gorge Waterfall is generally popular amongst the local people as the “Three Bridge Chasm”.

The existence of the Baatara Gorge Waterfall was first made public by Henri Coiffait who was a bio-speleologist by profession. In 1952, he reported the existence of this chasm which receives water from a height of 255 metres during the seasons when the ice of the Mount Lebanon starts melting. The location is made all the more spectacular because of the three naturally created bridges which hang one on top of the other which move inside in to the chasm of Mount Lebanon. It is from behind of these three bridges that the water of Baatara Gorge Waterfall cascades down.

This hole is known to be made limestone belonging to the Jurassic age and is a huge crowd puller in Lebanon.  The age of the limestone is known to be about 160 million years. Some scientists have also performed dye experiments on the water of the Baatara Gorge Waterfall only in order to prove that the water once again come out under sun in another village called Mgharet al-Ghaouaghir which is located near to the village of Balaa. There was also a proposal to fix safety equipments for people interested in sports who accessed the region. However, this proposal was soon nullified by the authorities as that would ruin the natural beauty of the place.

As per the geologists who have studied the reasons behind the creation of this spectacular landform, it is understood that the top most bridge of the gorge may have had the earliest presence. Perhaps it was following a number of erosions and collapses that the other two bridges may have got formed. The gorge of the Baatara Gorge Waterfall is still known to be constant changing because the severity of the winter ice many a times leads to breaking of huge chunks of the pothole from both sides of the wall.

The site issues a number of warnings to the tourists nearing the pothole. These warnings are there to prevent them from going too close to the mouth as it may be slippery and also warn them to access the bridges because they always bear the risk of collapsing under the body weight of many tourists together. Otherwise, the Baatara Gorge Waterfall is a delightful destination for adventurous tourists who can also enjoy the nearby Tannourine Cedar Forest Reserve or the mountain trail of Mount Lebanon. There are camping sites in the region too which can enhance the experience.