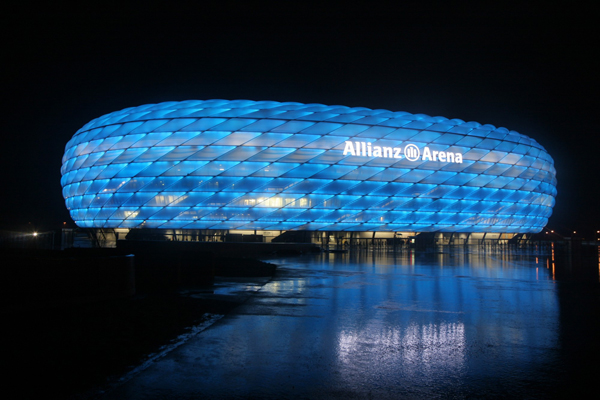 If you claim yourself to be a football fan then not knowing about the Allianz Arena football stadium of the north Munich, Germany is a shame to the game. With a seating capacity of 70,000 people, it is the third largest football stadium of Germany and is known to be one of the most modern ones across Europe. Allianz Arena is also home to two of the established football clubs of Germany, namely FC Bayern Munich and TSV 1860 Munchen. Since 2005-06, both these two clubs now play their home games in this stadium after playing in the Munich Olympic Stadium from 1972.

In Germany, therefore, the three stadiums which have the ownership to the game of football are the Signal Iduna Park of Dortmund, the Olympiastadion of Berlin, and the Allianz Arena of Munich. Although the stadium is named after the global financial service providers Allianz but they are not allowed to use the name at the time of hosting the FIFA or the UEFA matches. The Allianz Arena is also addressed by the name Schlauchboot which means the inflatable boat because of the 2,760 cushions in the shape of diamonds which make up the external covering of the stadium. It is also the first of its kind in being a stadium which changes colours from outside, like being red when hosting the games of Bayern Munich, white when being used by the national team of Germany, and so on.

The planning for the Allianz Arena was done by famous architects Jaques Herzog and Pierre de Meuron. The total area covered by the Allianz Arena is 66,500 sq metre. Such is the planning of the stadium that the entry way to it is separated from the largest underground car park of Europe by an esplanade which is sufficiently raised. Keeping in mind the weather fluctuations of the stadium, the blinds of the stadium can be folded back and forth so as to prevent the hindrance of sun or rain. The entire Allianz Arena is actually wrapped by 2,874 ETFE air panels which are made of foil. These are kept inflated with the help of dry air whose pressure keeps varying. When the panels are viewed at a distance they appear to be white in colour however, coming close you can spot both the small dots and the foil. It is when the panels are lit by various colour lights that the arena starts glowing.

As the Allianz Arena is always favourite with the fans and always gets filled up for any game it hosts, the reception and service facilities of the arena are also maintained with efficiency. The catering service is of about 6,000 sq metres meeting the culinary requirements of visitors. The car park too can accommodate about 10,000 cars so that people can easily reach the Allianz Arena.

As the distance between the Allianz Arena and the Munich city centre is 10 kilometres, it is accessible by public and private transports.